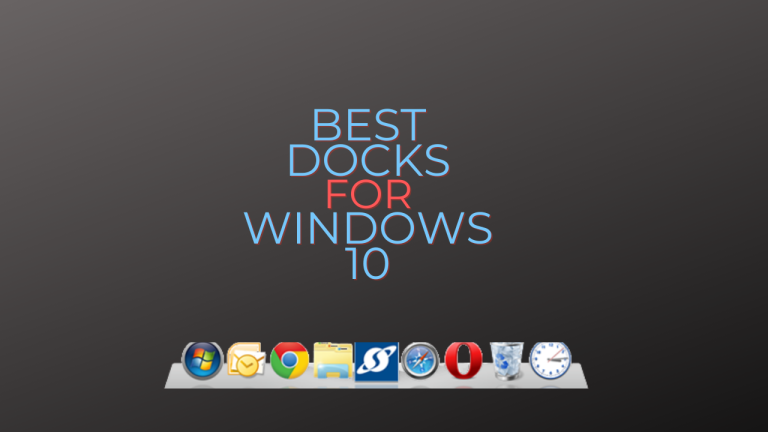 In this article, we will take a look at the best Windows 10 Docks that look very similar to Mac’s Launchpad. One of the major advantages of using macOS over Windows is the versatile app dock it offers. macOS has arguably been considered a more user-friendly interface, while Windows has been considered a more utilitarian system.

Even though Windows has been taking steps to make it more user-friendly, there is still a long way to go before it catches up to macOS’ Launchpad. Even though Windows does not have a versatile app dock like the macOS, numerous third-party apps can help fix this issue.

Even though WinLaunch technically isn’t a dock app, the look and feel it offers are pretty similar to that of Launchpad. The app is really easy to use and has a neat interface. You just need to hit the Shift + Tab keys on your keyboard to open it, and then you can add files, folders, shortcuts and much more to access them quickly. Moreover, you can customize the shortcuts’ name, placement and icon.

The files and apps can be organized into folders by simply dragging and dropping them on top of each other. If you want to delete an item, all you need to do is click and hold the app for at least three seconds and click on the “X” that will appear in the top-left corner.

CircleDock is one of the most unique and best Windows 10 docks. The app allows you to arrange your frequently used apps, files, and folders in a circle and access them quickly. Not only does it make your desktop look unique, but it also gives you the advantage of having your favourite apps at your fingertip.  You can hit the Windows + Ctrl keys on your keyboard or set up your own custom hotkey to open CircleDock.

Just like WinLaunch, you can drag and drop apps, files and folders to the dock. You can use the arrow keys on your keyboard or your mouse’s scroll wheel to rotate through the items. However, the circular organisation could make adding and removing items difficult. The app allows you to customize the background and centre buttons as per your preference.

Up next on our list of the best Windows 10 docks in RocketDock. The app was developed in 2005 but is still quite popular today. RocketDock comes with shortcuts to frequently used folders and a full-fledged Recycle Bin. You can add and remove folder shortcuts, personalize them with icons and customize the dock’s appearance with 30 different themes.

Adding apps to RocketDock can be a bit difficult. First, you will need to create a shortcut for the app and then drag it to the dock to add it. Moreover, the app doesn’t work in sync with Windows Taskbar. Hence, if you launch an app from the Start Menu, it won’t show up in the dock. Additionally, RocketDock comes with a handy auto-hide feature.

ObjectDock is one of the best Windows 10 docks for multitasking.  It gives you access to the main dock, which is known as the Quicklaunch Dock and a Tabbed Dock. The Quicklaunch Dock works quite similarly to the dock on your Mac. The Tabbed Dock can be viewed as another location to add shortcuts for your apps, files, folders, documents, etc.

You can view all your open applications, running windows, and minimized windows on the Quicklaunch Dock. You can customize its position, size, style, colour and animation.  The app gives a zoom effect like the Mac dock when you hover your mouse over the icons.

You also get a preview of all the windows you have open for a particular app when you hover over it. The Flyout menu is one of the fascinating features of ObjectDock. The app comes with a 30day free trial, after which you can purchase it for $4.99.

NexusDock is one of the most versatile app docks for Windows 10. It allows you to enjoy the sleek, easy-to-use look of a Mac dock and the functionality of a Windows Taskbar. Just like ObjectDock, NexusDock shows you a preview of your windows when you hover over an app. It also has shortcuts for the Windows Start Menu, Windows Search Bar, your System Tray, and more. If you’re looking to replace your Windows Taskbar with an app dock completely, it doesn’t get any better than NexusDock.

NexusDock offers more features than the Mac dock and Windows Taskbar combined. You can choose from over a dozen of effects to display when you launch an app, hover your mouse over a shortcut, or delete an item. Moreover, it comes with a fully functioning recycle bin, a real-time weather icon, and a live CPU and RAM meter.

You can add shortcuts for Internal Commands to the dock along with programs, files, and folders. NexusDock has a free and paid version that lets you create unlimited docks, personalize system tray icons and much more. It is undoubtedly one of the best Windows 10 docks.

Silmeria is a popular dock for Windows 10. However, you’ll need to do a bit more work to get Silmeria set up on your desktop compared to other Windows 10 docks we discussed earlier. For starters, you will need to use an additional desktop customization tool called Rainmeter, create a DeviantArt account and download the Silmeria .rmskin file. All of this effort is totally worth it if you are looking for a cool and unique app dock.

Silmeria offers a wide range of customization options, such as adding thin white bars in the areas where you want docks. Moreover, when you hover over an item in the dock, the colours invert and provide a sleek effect that clearly indicates the highlighted app.

Like Silmeria, you will need Rainmeter on your desktop to set up Material Taskbar. The flat and elegant user interface of Material Taskbar makes it one of the best Windows 10 docks. The Android design style loosely inspires its design, and it can contain not only your favourite files, apps and folders but also extra functions like the recycle bin and a power button. You can play around with the colours or opt for a fully monochrome style and also remove the “board” that the bar sits on as per your preference.

This concludes our article on the best Windows 10 docks. We explored some of the coolest and most versatile docks for Windows 10 that add to the functionality and look of your desktop. We suggest you to give these apps try and let us know which one you like the most. Do you know of any other Windows 10 docks? Let us know in the comments below.