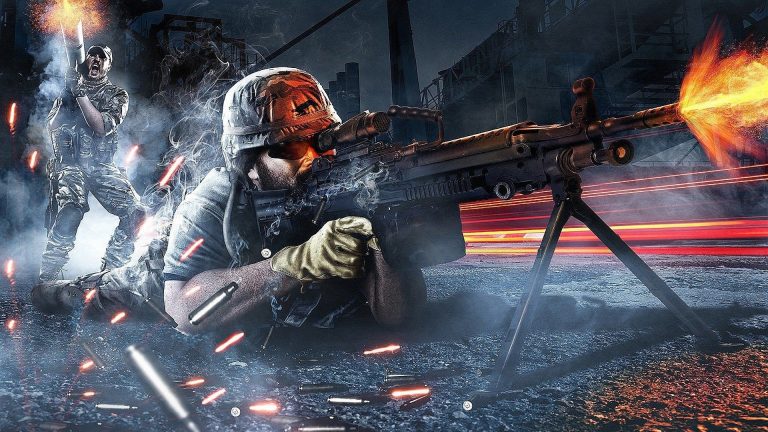 If you have encountered first-person shooter video games in the past, you must have heard about Battlefield already. It is a game that has been developed by Swedish company EA DICE and has been a huge commercial success. If you’re interested in playing the game then you may as well play all Battlefield Games in order.

There are over 50 million people who are playing this game from across the globe. There have been a lot of games in this series and we are about to talk about all battlefield games in order:

No, the game wasn’t released back in 1942 itself. But it did come in the year 2002, almost 20 years prior and Battlefield is still doing wonders in terms of popularity. It goes to show you that Battlefield has been successful for two decades straight.

As we have already discussed, you get to see all the action from the first-person point of view. While it was the first game in the series, it still had some amazing features to give to the people.

You had to come up with a group effort to pass the missions smoothly. It is an online multiplayer game too, a rarity for the games that were released in the early 2000s.

After 2 years, the developers decided to come up with a new version as the original game had resulted in a tremendous response. So when we are talking about all battlefield games in order, Battlefield: Vietnam sits second on the list.

The goal of the game was set as per the first version, you had to perform collectively to win in this game. It doesn’t mean that no changes were brought here. Some of the major changes included more versatility in the weapons, shooting from the passenger side and listening to the radio on the vehicle from the 1960s.

Unlike the predecessor, the developers didn’t take much time before releasing this game. Battlefield 2 was released one year after the release of Battlefield: Vietnam. This game is based around a fictional world war so it goes a level up from the previous two versions, something you would have expected when you looked forward to all battlefield games in order.

The developers focused on making the game as modern as possible, making it a game belonging to the 21st century.

Just like its predecessor, this version didn’t take much time before getting released. While the previous version was released in 2005, this game came out in 2006. When you look at all its predecessors, the focus was majorly on the past or the present. But Battlefield 2142 is one game that majorly focuses on the future.

This game is set in the ice age and the major focus is on the habitable sections here. This game is based on a reward system. When we talk about all battlefield games in order, this one was the first to come up with this system. So as you improve yourself in the game, it is going to unlock some features and achievements for you.

Now engaging in a large-scale battle becomes far better. With a lot of weapons, vehicles and aircraft included in the game, the fun is going to increase as well. The game is set in a fictional world where the US and Russia are fighting against each other.

This game was released in 2009. This one is the sixth version of this franchise when we are looking at all battlefield games in order. This game takes you back into the times of World War II.

You can either be a part of the Japanese army or the US army here. Since the game had become a huge hit, people were always having high expectations from the games to come in the future too. This is the reason why Battlefield 1943 did amazing in pre-sales.

This game was released for PC as well as console platforms in 2010. The inclusion of chopper and quad bikes makes the experience so much better here. It is the game modes that make this game unique from its predecessors.

There are over 5 different game modes available here. Since the scope widened up, people and critics found the scale of this game pretty impressive.

The focus here is on the single-player campaign. As we have already discussed, the franchise has kept on increasing its hype after each release. Battlefield 3 happens to be one of them as well. It sold over 5 million copies within the first week, the first to achieve this target when we talk about all battlefield games in order.

You can accommodate over 64 players into the single game here. The detailed maps add to the value and are a testament to the fact that the bar was raised, just like every release before it.

After over a decade of the introduction of the franchise, Battlefield 4 was released in 2013. The majority focus was kept on the multi-player version and the single-player version was mostly ignored, much to the criticism of the game.

But as far as the multiplayer version was concerned, it did great business with a sale of over 7 million copies within the first week. The plot of the game was set in the future, somewhere around 2020.

It was the tenth game of the franchise and it was released in 2015. The previous versions of the game focused on the war between two countries. When we talk about all battlefield games in order, this was the first game that shifted the focus to war with criminals and justice.

It was the single-player version that earned a lot of fame. You work with your partner here and the goal is to deal with drug dealers. The reviews for this game were mixed but it was successful commercially, just like all of its predecessors.

The previous few versions did not set the bars high as critics felt that something was lacking in the game. Battlefield 1 changed the whole dynamics as it went very well with critics as well as the players. It was released in 2016 and had a lot to offer to its audience.

As far as a single-player campaign is concerned, you had over six characters to choose from here. There are many modes available in the multiplayer version as well. It achieved a great reputation in front of critics and the players had some fun as well.

With the 12th version of Battlefield, the focus was to keep the game as realistic as possible for the players. Some of the critics felt that the previous versions provided some unrealistic war circumstances and this game was released just to change that perception.

There were many modes to look forward to in this game and the multiplayer mode was changed for the better. All in all, this game didn’t disappoint its fans.

13. Battlefield V Tides of War – Chapter 6: Into The Jungle

This one was released in 2020 and is the latest drop from the developers when we talk about all battlefield games in order. The game is set on a luscious island. It means that you don’t have to focus slowly on the vehicles but you can utilize the sea route to the best of its potential as well.

As you build your experience and rise the ranks, you’re going to unlock more features in this game.

In this post, we discussed all the Battlefield games in order. It has definitely a huge franchise in the video game industry. Looking at its commercial success, we can expect a new release very soon from this franchise! And don’t worry, we’ll update the list as soon as there is a new release.