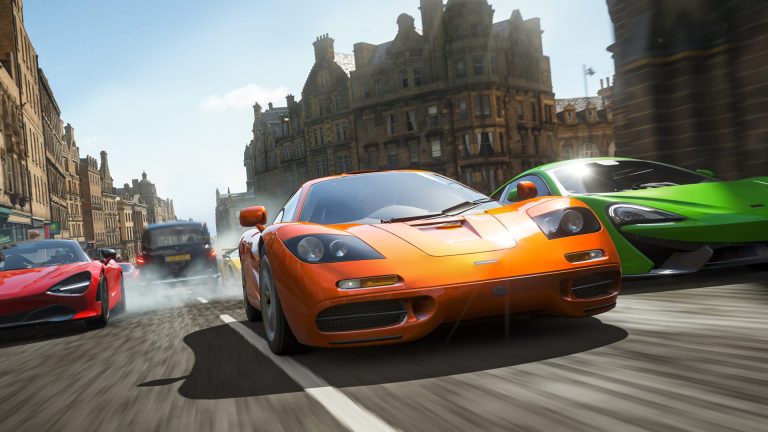 This article will discuss the best car racing games for PS4. Have you bought a PS4 recently? You might not be able to contain your excitement from playing all kinds of games. It’s a dream for every gamer to own a PS. PS4 is currently one of the most demanded PlayStation platforms all across the globe, and rightly so too.

NASCAR Heat has turned up the heat with back to back successful games in its franchise. The latest addition is NASCAR Heat 4, and judging by its reviews, this is one of the most thrilling car game experiences you can have on your PS4.

Developed by Monster Games, they know how to send a chill down the spine of gamers. Apart from standard car racing competitions, you get to be a part of certain events here, and these events include the NASCAR Cup Series, the NASCAR Gander Outdoors Truck Series, the Xtreme Dirty Tour, and NASCAR Xfinity.

This game was developed by Milestone. It is more of an off-road experience. If you’re a fan of cross-country racing, Gravel has to be one of the top names in your mind regarding car racing games for PS4. It was released in 2018, and the hype is still alive for this game. Its uniqueness makes it such a popular option for all kinds of gamers. Apart from Cross-country, this game includes several other modes such as Wild Rush, Speed Cross, and the Stadium Circuit modes.

When we talk about car racing games for PS4, NFS is bound to be included in the list. This game was developed by Ghost Games which are usually not associated with the NFS series.

We must say that they have done a commendable job, making Need For Speed Rivals one of the best games of this franchise. You have two choices here, to play as a cop or an illegal racer. The playstyle is going to differ in both cases. You can go back and forth between the two choices as the game will never become boring for you that way.

Codemasters took a look at the time to bring a new game after Race Driver: Grid in 2008. It took them 11 years as GRID was finally released in 2019. We must say that the game was worth the wait. The thin line between simulation and arcade has been drawn beautifully in this game.

If you want to hone your skills as a driver, this car racing game for PS4 can be helpful in the cause. One of the things that help this game stand out is its graphics. When you play this game at 60fps on a PS4 Pro, you will be thrown into a different dimension.

This is an arcade racing game, contrary to most of the other names featured on this list till now. Such games don’t need amazing graphics to capture the eyes of gamers. This game was released for PS4 in 2018, but it was initially meant for Android devices.

The unique feature of this game is its 4-player split-screen gameplay. So you can come together with your friends and have a ball while playing Horizon Chase: Turbo Edition. With over 100 different tracks to explore, things will constantly be engaging in this game.

Would you like to play a game that offers you unique tracks to explore? Trackmania Turbo is meant for you. It was developed by Nadeo and released back in 2016. The developers have focused on bringing short courses to the game.

But during this short course, you will be offered different flavours, such as lots of air time and vicious twists. So every turn will be crucial in deciding how far you can reach in the game. Things become even more heated up when you turn on the multiplayer mode.

There’s a “Crash mode” in this game that centres around crashing into your opponents spectacularly. The game is undoubtedly going to be an extremely entertaining experience.

It’s not mainly a car racing game; it’s so much more instead. In Dirt 5, you can use cars, monster trucks, buggies, and vehicles to be a part of the game. You will have a chance to race on dirt, mud, ice, and rocks, among so many other environments. You will get dynamic weather conditions in the game that will change as you move forward in the race. The subtle lighting effects make the game more exciting and realistic. If you would like to test your racing skills against an experienced lad, you can do so in career mode.

When we talk about car racing games for PS4, Gran Turismo Sport is a prominent name that comes to your mind. It is because this game is meant explicitly for PlayStation platforms. If you think that you have excellent racing skills, it’s about time you prove it to the rest of the world by playing Gran Turismo Sport.

Over 300 cars and 80 different racing tracks are available in this game. So you have got a great scope to be innovative over some time. The Arcade mode will offer several time trials and test modes to you.

If you have played many car racing games before, you might have gotten bored of the same old racing tracks. It’s about time you experience something different, something like Redout on your PS4. It is a futuristic arcade racer with racing tracks like no other game.

Several modes, including the infamous career mode, will teleport you into a different environment. If you want to play with actual human beings, you can do so on 25 different tracks across 5 different locations. So none of your races will feel the same if you keep on taking these different tracks into account.

As the name suggests, all hell will break loose when you play Wreckfest on your PS4. You have got plenty of frustrations in your life? Take it all out by playing this game which is all about destruction. The game was developed by Bugbear Entertainment and was first released back in 2019.

You can do damage around, and it would be over the top and authentic at the same time. It’s not your typical car racing game, but we are sure you would like to try something different from the average and bland versions.

This game was first released in 2014 but got poured with negative reviews. So the developers had to fix all the wrongs and develop a new version in 2019. If you want to find that thin line between simulated realism and arcade accessibility, there’s no better game than that of DriveClub.

There are plenty of cars to choose from while playing this game. It has often been raved about as one of the best car racing games currently.

We had to include another game coming from the NFS series. After all, this particular series has dominated the scenes in car racing games for PS4. Some of the games in this series might have failed to satisfy gamers’ expectations, but the same isn’t the case with Need For Speed Heat. It will help you enjoy illegal races while the level of graphics has gone a notch higher. The competitions and circumstances will differ during the day and the night time.

Slightly Mad Studios have done remarkably well by making Project Cars 2. The variety on offer in gameplay is like nothing else. This gameplay looks even better when you play this car racing game on your PS4. From rallies to go-kart circuits, there are plenty of things to explore on Project Cars 2.

These are the most popular and exciting alternatives for car racing games for PS4. You can download most of these games, and you will never feel bored. It’s a fantastic experience to play games on PS4, and when you go for the quality ones, you are bound to get thrilled and excited!